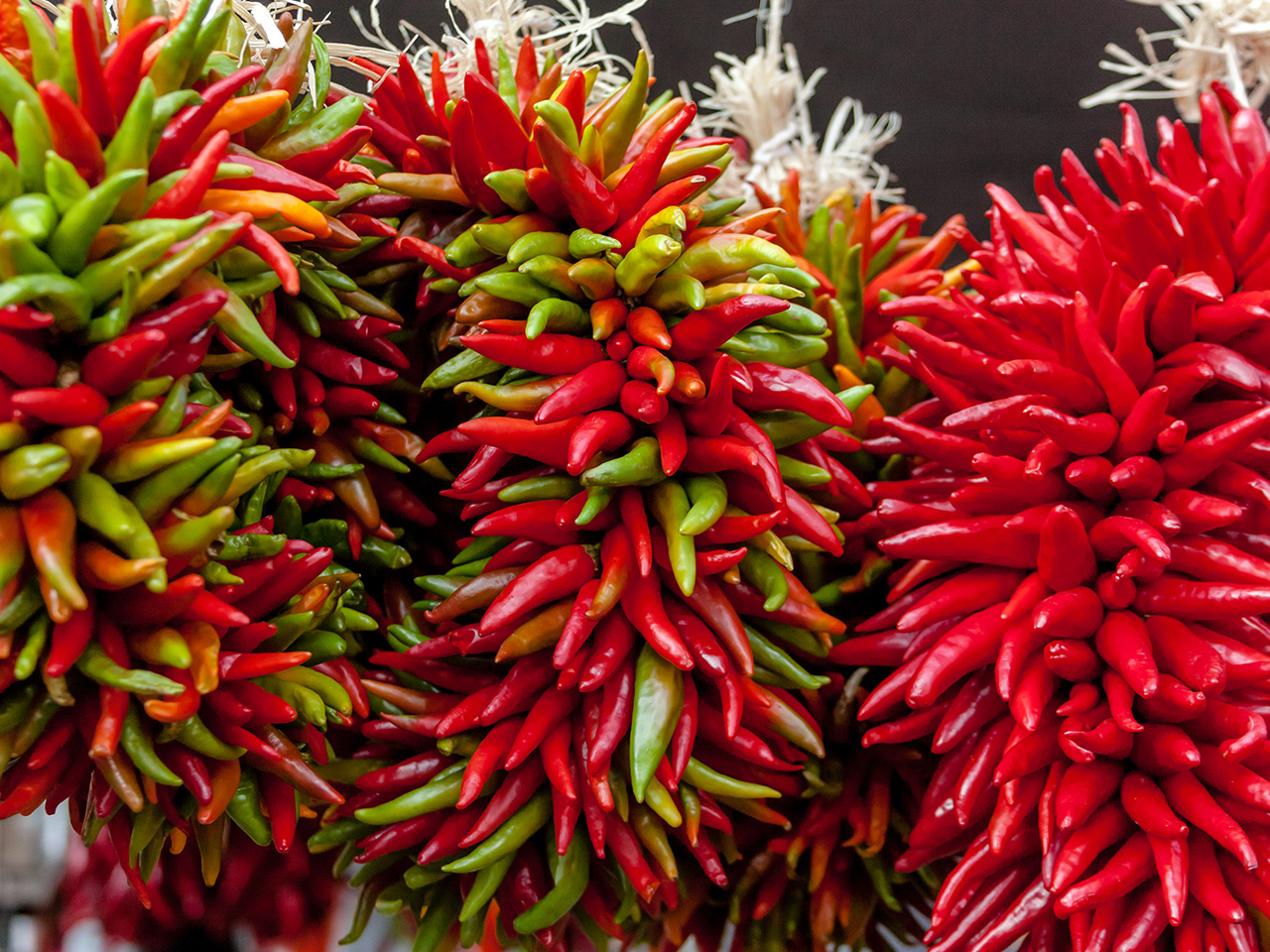 Looking for a bucket list with a difference? Set yourself a challenge and sample some of the world’s hottest chillies. But wait – if you imagine that involves eating curries for the next 12 months, think again. From ice cream which will ignite your taste buds to French cheese with a fiery punch, feeling the heat has never been so much fun.

The king of chillies: Veracruz, Mexico

Orange and green jalapeño chillies are named after the city of Jalapa, the state capital of Veracruz. However, they’re celebrated across the country as the hot hero of Mexican staples such as chilaquiles, enchiladas and picadillo. The colourful peppers even grace the country’s Christmas trees during the festive season instead of baubles. Image by Teri Virbickis

It’s been linked to tackling cancer, reducing pain, easing headaches and even helping arthritis. To discover the health benefits of sichuan pepper (while losing all sensation in your mouth) head to Chengdu in the province of, you guessed it, Sichuan. Recently declared a city of gastronomy by UNESCO, Sichuan’s chilli hot pots, ma po tofu and fiery kung pao chicken are best sampled at Baguo Puyi (55 Shenxianshu Nan Lu), where the evening operatic show should take your mind off the burning sensation. Don’t forget to pick up a chilli-covered snack too. Image by Shinelu

Anther part of the world, another chilli of choice. For our friends who inhabit the gorgeous islands that dot the Caribbean Sea, in particular Jamaica, it’s all about the Scotch Bonnet, so named because the shape of the pepper resembles the traditional Scottish bonnet known as a tam. But 19th-century fashion statement aside, the chilli pepper is responsible for the fiery kick in traditional jerk chicken. This street-food dish is sold across the island from roadside stands to beach huts – look out for the marinated meat slow-cooking on barbecue racks. Image by Charlotte Lake

From tongue-tingling tom yum soup to the bold heat of a massaman curry, many of Thailand’s classic dishes revolve around the eye-watering bird’s-eye chilli. But that didn’t discourage the team at Spice Shop when they started testing formulas for their chilli ice cream. The purveyors of spice and herbs can be found in Siam Paragon shopping centre, and it’s worth swinging by to sample their wares on a hot and humid Bangkok day. The freezer features chilli, ginger, lemongrass and pepper ice creams. Image by Fotografiche

Learn to concoct classic chilli-fuelled dishes at the Sydney Seafood School in Pyrmont. With fresh ingredients sourced from the Sydney Fish Market next door, pupils learn how to create Singapore-inspired chilli crab with ginger and green onions. Once the art of preparing a crab has been demonstrated, it’s time to tackle a clawed crustacean for yourself. The school keeps the heat going all year round with spicy Thai and Chinese classes, too.

Originally used when curing Bayonne hams – in order to impart a mild heat and smoky-sweet flavour – the Basque town of Espelette’s eponymous dried red pepper is so loved it has been granted AOC status (appellation d’origine contrôlée) and has a festival in its honour. Look for strings of peppers drying in the sun and sample the year’s harvest in the local sausages and hearty fish stew. It even makes an appearance in the region’s goat’s cheese, called Tommette d’Espelette. Image by Peappop

Take a look in the Guinness Book of Records and you’ll see that the ghost chilli – known in its native home of Assam in northeast India as bhut jolokia – leads the way when it comes to chilli-eating endurance, or sheer stupidity. One of the hottest specimens in the world, the record currently stands at 60 chillies consumed in two minutes. If this sounds like a challenge too far, put your chillies to another use – superstition goes that if you string chillies and lemons together you will be safe from evil spirits. Image by Cyril Hou

How do you stay warm on a cold evening in the Andes? Stuffed rocoto chillies are the answer. Grown on the region’s vast valleys and plains, these round yellow and red chillies are some of the hottest in the country. Filled with spiced beef or pork, onions and olives, they’re baked with potatoes and cheese, and are guaranteed to give you a toasty glow. When eating out in the Andean city of Arequipa, look for rocoto relleno on the menu. Image by Yaromir

Grab your sombrero and head to the UK’s famous Chilli Fiesta. This three-day event takes place in the gorgeous West Dean Gardens in West Sussex, and features so many hot events people camp in the grounds so as not to miss out. Expect food stalls selling everything from Ethiopian goat curry to chilli-flavoured truffles and pepper-infused vodka, live music, cookery demonstrations and tastings galore. Across the pond, the Santa Cruz Beach Boardwalk Chili Cook-Off (not an easy event to say when your mouth is stuffed full of homemade chili con carne) sees amateur and professional chefs go head-to-head with their tried-and-tested recipes. At the end of the day, only a few teams will be crowned the chilli kings and queens by the judges, while a closely contested people’s choice award sees the chilli-munching public cast their vote.

Tomato juice, vodka, a grind of black pepper and a splash of Tabasco sauce – a Bloody Mary is the classic brunch-time cocktail. While its exact origins remain unclear, most stories surrounding its creation point to New York. Find out whether the reported hangover cure works for you at James in Brooklyn. This Prospect Heights bistro ramps up its hair-of-the-dog offering with an extra fiery version that features jalapeño-infused tequila.